The store will not work correctly in the case when cookies are disabled.
FREE store pick up within 30 minutes!See details

JYSK and The Royal Danish Family

The Royal Danish Court has throughout the years been regular customers in JYSK. A tradition that JYSK is very proud of.
Her Majesty the Queen of Denmark has given permission to JYSK that we may use the designation By Appointment to The Royal Danish Court. A label that is only given to companies or persons that have done business with the Royal Court through several years, are well-established, economically sound and have a good reputation. In addition Lars Larsen, the founder of JYSK, was in 2009 assigned the cross of the order of chivalry by the Danish Royal Family for his achievements for the Danish business community.

In 2007, on behalf of JYSK and its large number of employees, Lars Larsen receives King Frederik IX's Honorary Award, which is presented in recognition of a valuable contribution to Danish export. 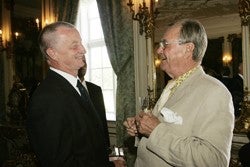 Knight of the Order of Dannebrog

In 2009, Lars Larsen is decorated as Knight of the Order of Dannebrog for his outstanding contribution to the Danish business community. 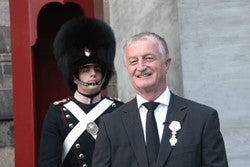 Back to Top
WIN A $500 JYSK GIFT CARD
Sign up to the JYSK email newsletter and you will be entered into prize draw to win a $500 gift card. You will receive weekly offers, seasonal contests and inspiration directly to your email inbox.